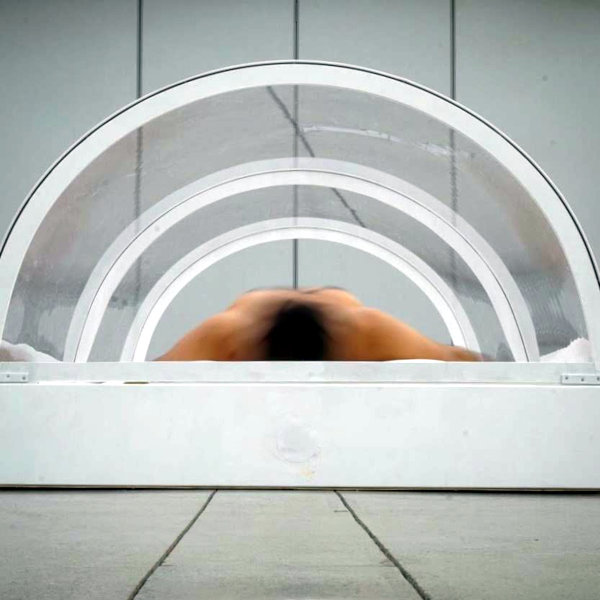 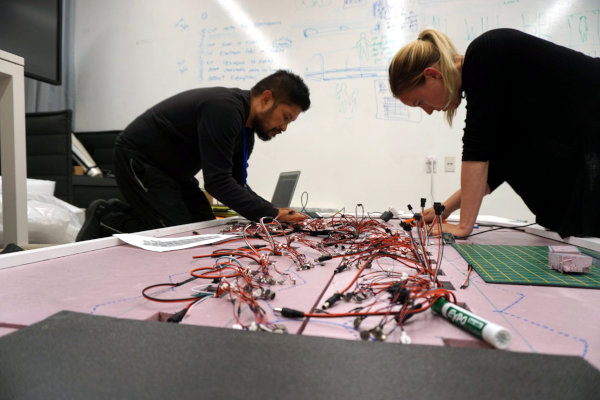 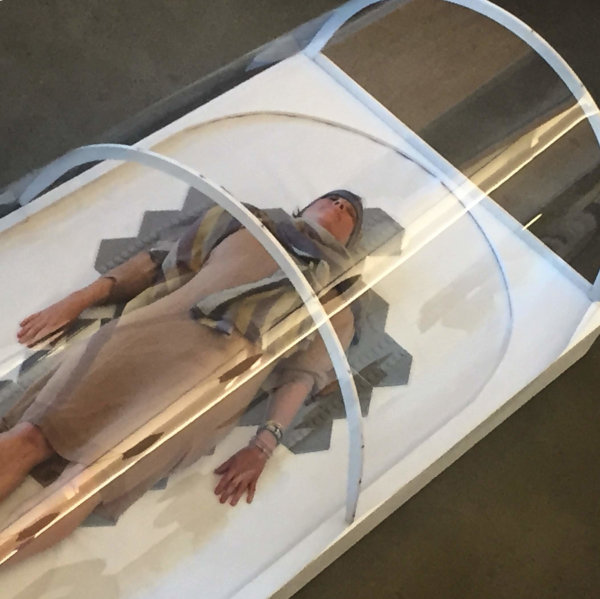 Between 15 July and 15 August, Diego S. Maranan, Agi Haines, Sean Clarke, and Frank Loesche traveled to San Francisco to create and exhibit “RE/ME”, an installation that provided a unique subjective experience. This team of CogNovo research fellows was invited by DART and Artshareto Swissnex San Francisco to explore the idea of how an immersive multisensory technology can be used to alter bodily self-perception. Based on haplos, Diego’s PhD project at CogNovo, they had previously won a Hack the Brain competition and a pitch with STARTS in Brussels.

Drawing from multiple disciplinary approaches and perspectives, the group built RE/ME as an experimental and artistic vehicle to explore and experiment with different aspects of vibrotactile stimuli, visual design, and sound design on the bodily self-perception of people who entered the installation.

In a first step the four researchers — who had known each other from the CogNovo programme but had never worked together in this group — designed and built the installation. Each of them contributed different research questions and aimed for different goals. For example, Diego wanted to test how carefully designed patterns of vibrotactile stimuli could be used to positively enhance their bodily self-perception while Agi was primarily interested in how the body could be sculpted through external interventions. Sean’s interest was related to how individual differences between participants influenced their perception of sounds and subsequently the subjective experience of the installation. Frank wanted to observe if and how overarching experiences emerged from temporal and spatial isolated events. Together, they integrated their various questions into a novel experimental design that they tested on participants from the San Francisco public and research community.

Throughout the discussion and the process of making RE/ME, they arrived at a distinct visual, objective, and temporal representation of the experience. In parts, the process was similar to what their colleagues had previously described in their paper on ‘scenario building’ for a different study. As a result they produced a human-sized capsule-like object isolating the participants from the environment and creating its own immersive micro-environment. This space, shielded by a futuristic round and translucent window to the outer world, contained its own sound environment provided by integrated speakers and about 300 vibrating motors. These small motors were integrated within an iconic surface of tessellated silicone hexagons which could be addressed individually and wirelessly from an external control unit. Patterns of vibro-tactile stimuli and soundscapes were carefully composed and played back to the individuals throughout the 15-minute experience. The experience was preceded and followed by practices of body awareness and questionnaires. In a white paper on the project website, Diego, Agi, Sean, and Frank have summarised the background of the experience.

The residency was primarily supported by DART, an incubator for clever human-computer interfaces inspired by art, design, and technology; and Artshare, a company focused on innovation through research and development of new technologies, applications and services by methodological means of artistic practices and expressions. Further support came through Swissnex San Francisco, STARTS, Brainhack, Swisscom, Pro Helvetia, Engagement Migros and the Gebert Rüf Stiftung.