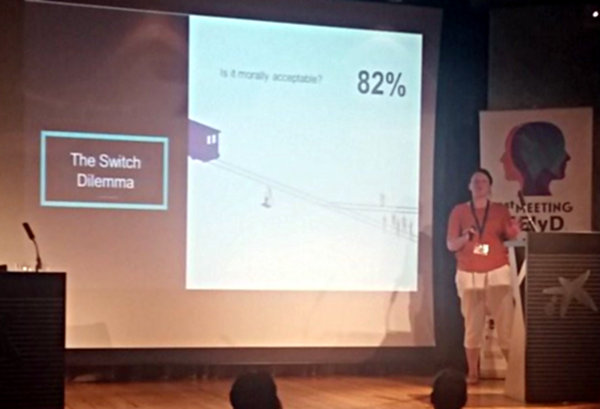 Kathryn B. Francis received first prize for outstanding research contribution to the First SEJyD Meeting, held in Palma (Mallorca), July 12-13, 2016. Kathryn received this award for her work "Moral Muscles in Virtual Landscapes" summarising her research exploring simulated moral actions in Virtual Reality. At the conference, Kathryn was presented with the award along with a one-year free membership to SEJyD and a monetary prize of 400 euros. Her contribution was chosen in double-blind reviews by a committee from the Society for the Advancement of Judgment and Decision Making Studies (SEJYD) as well as the University of the Balearic Islands Psychology Students Association (ARP).

This was the first meeting of the Society for the Advancement of Judgment and Decision Making Studies. At the conference, research was presented from multiple disciplines including, social psychology, cognitive psychology and neuroscience in the fields of judgment and decision-making.

"Moral Muscles in Virtual Landscapes", the work Kathryn was awarded for, is on dual-process models of moral decision-making which focus on interpreting judgments made in text-based moral dilemmas. These models have received little attention in moral action frameworks due to ethical constraints in studying moral behaviours. Recently, advances in Virtual Reality (VR) have provided platforms in which action simulations can be studied. In these studies, we introduce emotionally arousing moral scenarios in VR that require action. Responding to moral dilemmas in these action frameworks resulted in a greater endorsement of utilitarian responses compared to judgment counterparts. These virtual technologies offer opportunities to study morality with greater ecological validity in a way not previously possible. The research is part of her PhD project "Moral cognition: An interdisciplinary investigation of judgement versus action".