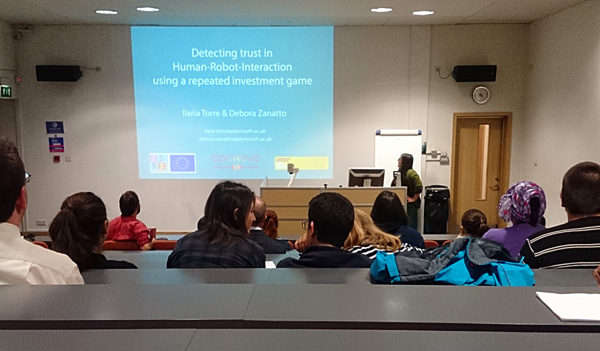 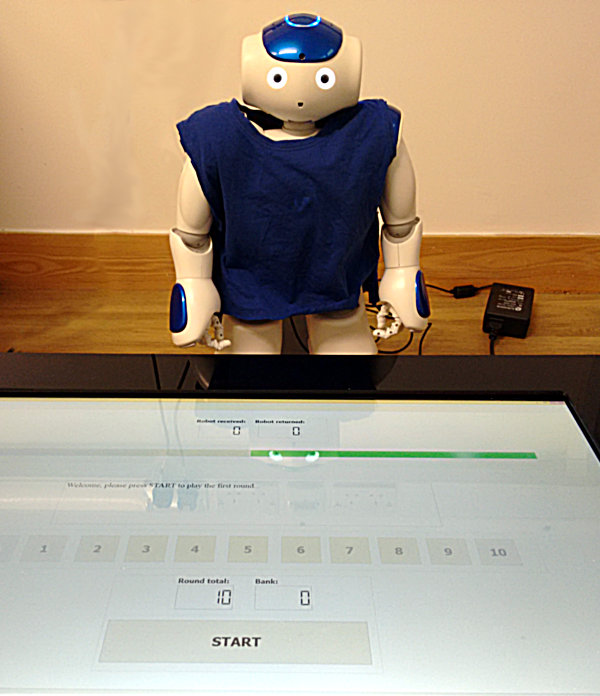 CogNovo research fellow Ilaria Torre participated at the Robotics Day, a public engagement event organised at Plymouth University. This event was in line with the national UK Robotics Week, which took place this week with events all over the country. In Plymouth, the day was a succession of short talks, during which Plymouth researchers presented their topics and latest discoveries to a broad audience, followed by a poster session and numerous open lab demonstrations. The day was concluded by a final discussion with the public and a panel chaired by Tony Belpaeme (Professor of Cognitive Systems and Robotics at Plymouth University) and consisting of Iain Stewart (Director of the Sustainable Earth Institute at Plymouth University), Kerstin Fischer (Professor for Language and Technology Interaction at the University of Southern Denmark), and Angelo Cangelosi (Director of the Centre for Robotics and Neural Systems at Plymouth University).

Ilaria first gave a short talk about the methodology of her latest experiment and discussed her experiments further during the poster session. During the open lab demonstration she invited all visitors to sit and play the "Investment game with NAO". This was a big success, especially with the youngest visitors!

Ilaria’s latest experiment continues to use the Investment Game as an implicit measure of trust, moving the focus to Human-Robot-Interaction. Being a linguist and phonetician by training, her previous experiments concentrated on the effect that different voices have on trust attributions in Human-Computer-Interaction. For the current experiment she teamed up with Debora Zanatto, a PhD student in the School of Computing and Mathematics, to translate the Investment Game to the robot realm as well. While Debora uses the previously developed implicit measure of trust for the movement and attention side of the experiment, Ilaria again focused on the effect of using different voices for the robot, this being the main focus of her research "Creating a Voice for Engagement and Trust". Stay tuned for the publication of the results of this experiment! The aforementioned papers on the effect of voices on trust can be found in the "Behavioural mediation of prosodic cues to implicit judgements of trustworthiness" (proceedings of "Speech Prosody 2016") and "Investing in accents: How does experience mediate trust attributions to different voices?" (Proceedings of ICPhS 2015).