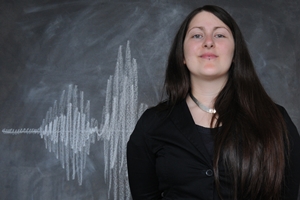 It was a busy summer for CogNovo fellow Ilaria Torre, who attended an important conference in Scotland, immediately followed by a week of intensive training at a workshop in Belgium.

From the 10th to the 14th of August, she attended the 18th International Congress of Phonetic Sciences (ICPhS), which took place at the SECC (Scottish Exhibition and Conference Centre, also known as "the Armadillo") in Glasgow. The ICPhS conference is the biggest gathering of phoneticians and speech researchers, gathering around 1000 attendees in this last edition; it takes place every four years, and the next one will be held in Melbourne, Australia, in 2019. This year Ilaria presented a poster entitled "Investing in accents: How does experience mediate trust attributions to different voices?" in the poster session on the topic: "Speech Perception III: Speaker and Social Attributes". The poster included the first trust game experiment that she ran, in which participants had to invest a fake amount of money into an accented virtual player, which was programmed to have either a Standard Souther British English accent or a Liverpool accent (see supplements for some example recordings). Coincidentally, at ICPhS another paper by Patti Adank was dealing with exactly the same two accents, but from the point of view of accent imitation.

Immediately after ICPhS came to an end, Ilaria flew to Mons, Belgium, where she took part in the 11th edition of eNTERFACE, an innovative one-month long workshop where participants work in pre-defined groups on pre-defined projects, which are carried out from beginning to end. For one week, Ilaria took part in the project "Environment-aware social agent", led by Huseyin Cakmak, Kevin El Haddad, Nicolas Riche and Julien Leroy. Working immersively on this project for a week allowed Ilaria to gain a useful insight into vocal synthesis practices, in particular with the STRAIGHT Matlab vocoder, and laid the basis for future collaboration with the researchers working at the University of Mons.