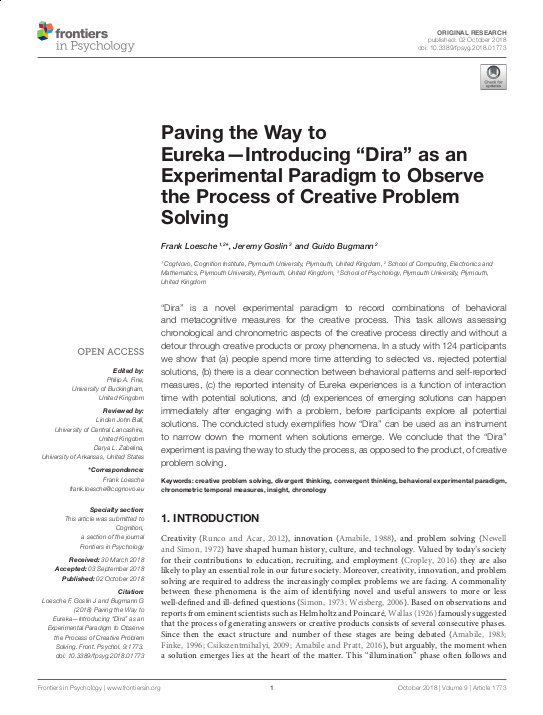 Frank publishes in ‘Frontiers in Psychology’

Frank Loesche and his co-authors Jeremy Goslin and Guido Bugmann just published the article ‘Paving the Way to Eureka — Introducing “Dira” as an Experimental Paradigm to Observe the Process of Creative Problem Solving’ in Frontiers in Psychology. In their study, they demonstrate that people who report a strong Eureka experience also exhibit a distinctively different behaviour early in the creative process of solving an ill-defined problem. Specifically, and as soon as they are trying to solve a problem, people look longer at the solution they will select later than at other potential answers. Even more interesting in the context of Frank's PhD project, the duration of the interaction with the solution correlates with the intensity of their subjective Eureka experience: people who look longer at a solution also have a strong Aha moment. This observation is possible through the novel experimental paradigm “Dira”. Participants in this study are asked to solve forty similar and ill-defined problems in a computer-based setup which is inspired by the critically acclaimed “Dixit” game. The mouse movement throughout this engaging experiment is recorded as a behavioural measure and provides a continuous record of the creative problem-solving process. This was one of the reasons “Dira” was developed: to research the creative process by itself and not as a derivative of measures of creative products or personalities.

The published original research is an outcome of Frank's PhD project “Unconscious Creativity: The Eureka Moment”. In his research, Frank was interested in the emergent phenomena of insights, Aha moments, Eureka experiences, hunches, epiphanies, serendipities, illumination, and related concepts. For his thesis “Investigating the Moment when Solutions emerge in Problem Solving” he conducted studies with architects to understand their creative processes and Design Thinking. Interviews with creative practitioners and studies Frank conducted in collaboration with his colleagues from CogNovo had an influence on the design of the “Dira” task. Finally, he excavated the process of how the term of insight and the German Einsicht came into existence and was negotiated in the literature about 100 years ago. In his thesis, completed with the viva voce in June, Frank discussed the breadth of this interdisciplinary work within the context of Cognitive Innovation, a framework developed throughout the CogNovo programme.