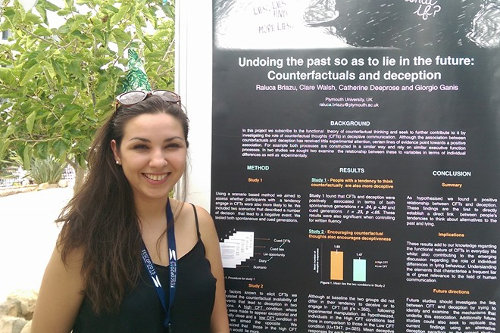 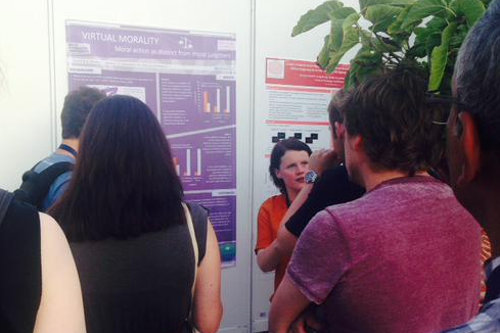 Kathryn, Raluca, and Mihaela at ESCoP2015

Kathryn presented a poster about her work on virtual morality, entitled: "Virtual morality: moral action as distinct from moral judgement" (17th September 2015) in which she introduced her research looking at virtual moral actions.
Presenting this novel approach of studying moral decision-making using the latest Virtual Reality technologies opened up further collaborative and interdisciplinary discussions with other attendees at ESCOP 2015. It also provided an excellent opportunity to demonstrate the multifaceted and innovative research approaches that the CogNovo project fosters. This year's conference included several poster and oral presentations discussing moral decision-making and also Virtual Reality methods in social cognition, an example was Paolo Riva's oral presentation entitled "Modulatory effects of transcranial direct simulation on utilitarian responses to moral dilemmas" which generated an interesting discussion about morality in neuroscience.

Raluca presented a poster about her work on the link between counterfactual thinking and deception entitled: Undoing the past so as to lie in the future: counterfactuals and deception. The poster presented Raluca's novel work on how imagining alternatives to the past can aid the generation of lies.

Both Kathryn and Raluca had a chance to network with other conference attendees whose work was closely related to theirs. Two poster presentations of particular interest to their project were Tiago Almeida's poster presentation; "Counterfactual reasoning and moral elevation" and Shane Timmon's presentation; "Cognitive depletion and moral reasoning". Mary Parkinson's oral presentation entitled "Counterfactual and semifactual alternatives in moral judgments about failed attempts to harm" brought together several social cognition topics of interest within the CogNovo project.

This year, the 19th Conference of the European Society for Cognitive Psychology (ESCOP) was held between 17-20th September in Paphos, Cyrpus. ESCOP has been organised since 1985 and brings together over 500 international members and attendees to present keynote lectures, symposia, oral and poster presentations. The conference aims to further scientific enquiry within the field of Cognitive Psychology and related subjects. Of particular interest to CogNovo fellows, is its focus on collaboration and exchange between researchers.

This year, keynote lectures were given by John Duncan (MRC Cognition and Brain), Zaira Cattaneo (University of Milano-Bicocca) and Peter Hagoort (Max-Planck-Institute for Psycholinguistics and Radboud Uni., Nijmegen).