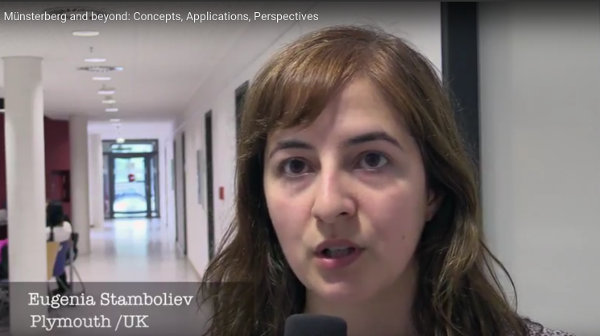 Hugo Münsterberg revisited! Back to the roots of film perception.

CogNovo fellow Eugenia Stamboliev presented her paper on "Münsterberg, Flusser and the Screen Bodies" at the conference "A hundred years of Film theory. Münsterberg and beyond: Concepts, Applications, Perspectives" in Leipzig, Germany. Eugenia's paper "Münsterberg, Flusser and the Screen Bodies” is inspired by questions on how watching movies, or spectacles on screen, influences our bodily spatial experience. This paper looks into the interaction of the viewer's body with the screen and the screening surface. It brings up the idea of a dichotomy of experiencing the film experience, which means, the viewer is having a two levelled interaction with the abstract and the concrete film body. The viewer's interaction with the abstract screen body — with plot, material and technology — is thought to happen on the level of meaning. The viewer's interaction with the concrete screen body — with actual screen or screen surface and environment — is seen to be the spatial concrete way of experiencing. The purpose of this dichotomy is to bring up questions on imagination, affect or physicality entering the discussion of how bodies get shaped and disciplined to fit technology's standards. It concludes with acknowledging how the shift towards digital technologies demanded for a redefinition of spatial abstraction and concrete materiality. This paper emerged as part of Eugenia's PhD project "Intimacy as affective response. Between cognitive emotion and affective relatedness.".

The conference, which took place from 29 June to 2 July 2016, was a collaboration between the University of Leipzig and the International Association for Media and History (IAMHIST) that aimed looking at audiovisual media from a broad variety of perspectives and disciplines and to highlight Münsterberg's achievements as a scholar, who began his academic career at the University of Leipzig before going to Harvard.

Eugenia was also featured in the film about the conference (at 1:41). Please have a look: