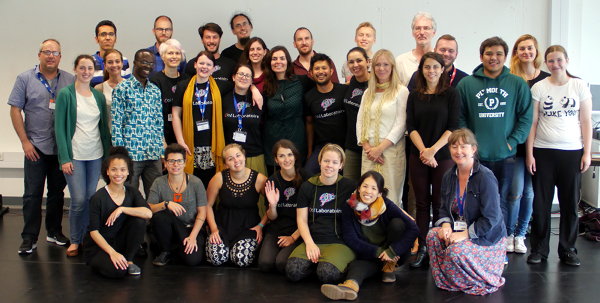 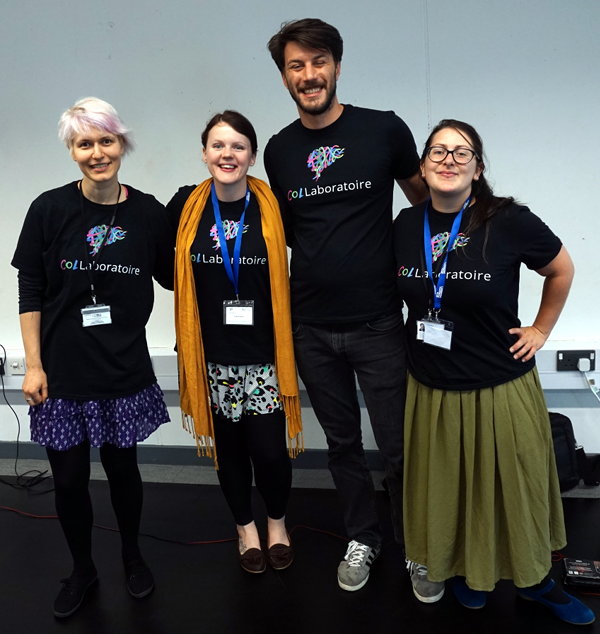 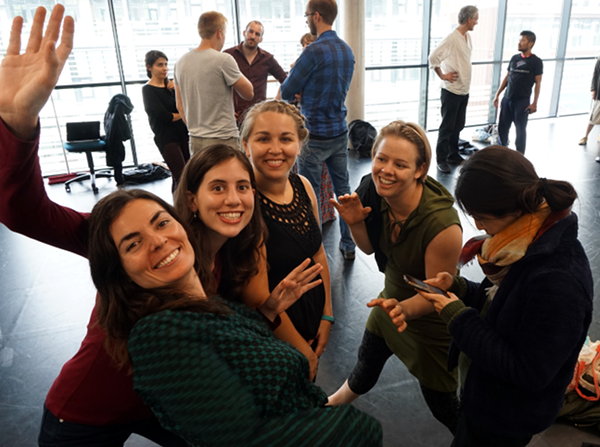 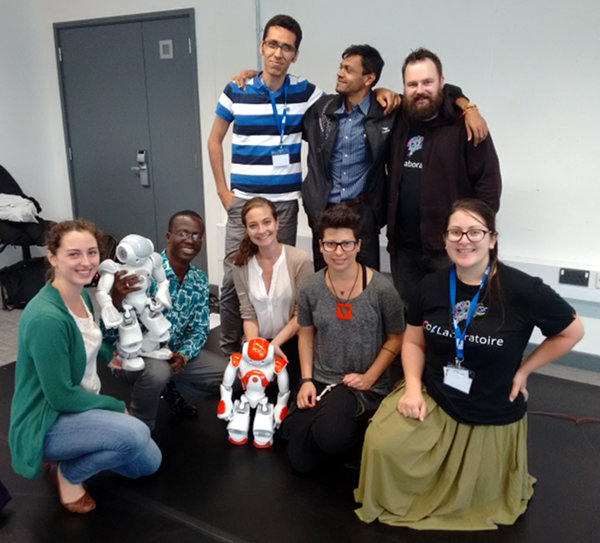 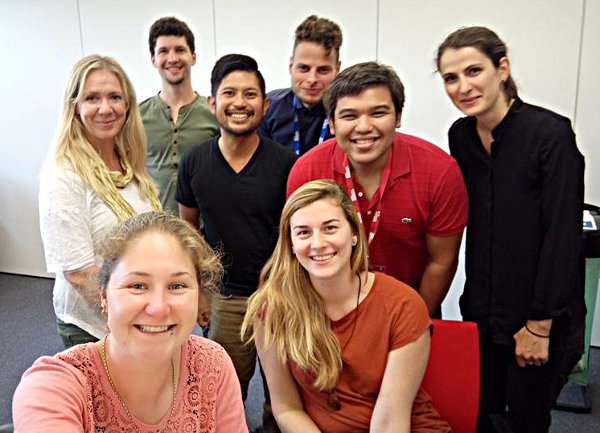 Feedback from our participants

This week resulted in a powerful experience, I've learned so much and found lots of pleasure in our collaborations.

[ColLaboratoire] was an absolute hit with me and i have been telling people that it was one of the best weeks of my life. I will admit that i was tiring however we did work hard yet it was all worth while because having such an amazing bunch of people working as a whole team kept me buzzing.

a huge congratulations and many thanks for organising such a brilliant summer school. i had such a stimulating week, with an amazing cohort and a truly inspiring group of project leaders.

It was quite surprising to see how the participants embraced all of the different information we threw at them, almost seems like Cognovo is contagious.

the project work was so outside of my comfort zone I learned an awful lot and loved every second of it.

During the week from 15 to 20 August 2016, the CogNovo headquarter at Plymouth University was buzzing with unusual visitors: we sent out a call for a summer school "ColLaboratoire" on social creativity and collaboration, and a number of absolutely fantastic participants came to work with us. During our initial call in February we offered six different projects to our applicants to chose from, of which we implemented four during the week in August: "Are Networks (Becoming) Conscious?", "NAO that's what I'm talking about", "Remapping the Sensorium: Do You Hear What I See?", and "Let's Improv it".

Besides project specific goals, the overarching aim of this summer school was to teach, observe, and learn how collaborations in diverse and trans-disciplinary research groups arise and can be fostered. For the facilitators of the four projects as well as the organisers of the whole week, the summer school provided an ideal test environment to evaluate experiences they have made during their more than two years working in the interdisciplinary environment of the CogNovo research group.

We hope that everyone involved learned something from this week and that our guests returned to their home institutions with something they didn't have before ColLaboratoire - maybe it was even the beginning of a new multidisciplinary (conscious) network?

While many summer schools seem to treat the organisational part as a necessary evil and in the best case as an administrative task, ColLaboratoire took a different approach: social events, welcome packages, and other small details were orchestrated as part of a holistic experience. Starting from our own shared experience of working closely in a multidisciplinary research group, we were interested in the question if and how the environment fosters collaboration and how communication across disciplines can be established within a short amount of time. Also the choice of invited speakers was intended to reflect the breadth of involved research fields without compromising on domain specific depth. For that reason Roger Malina, an astronomer who has a long history in interdisciplinary work, was invited to frame the work for the week. Alexandra Supper, who works at the intersection between science, technology, and sensory studies, gave an overview on the topic of sonification as a transdisciplinary research tool and finally Susan Blackmore speculated on the third replicator, the treme machine, in the context of conscious networks.

In our research project, we focused on basic human abilities to understand ourselves and each other on the level of actions, intentions, and emotional states. We explored the role and perception of the emotional aspects of physical touch and the ability to touch each other through space. We explored how kinaesthetic empathy allows us to understand others through embodied knowledge of our own states. As a result, we invited all ColLaboratoire participants on the last day to take a part in a 20-minute somatic movement experience. We shared our insights and reflection through embodied practice in darkness and silence, trusting the idea that much of the key knowledge in our lives is gained through experience. This way of sharing, which was novel for most in the group, was very well received, and gave participants a new way to relate to touch, their own bodies and the space between each other. Our research, as well as the influence of the summer school's topics and the group's social dynamics resonated through the movement of the group, creating a unique experience of sharing the space though individual and collective choices, finally resolving in togetherness in movement and rest.

"Nao" that's what I'm talking about

During the Collaboratoire Summer School, we had an interdisciplinary group of participants who worked on developing a performance with two NAO robots, Snap and Pop. The participants learned how to program the robots using the Choregraphe software, which creates behaviour, monitors and controls NAO. In the conceptual discussion for the project, we agreed on creating a piece that would interact and challenge the expected empathetic response to robots from the audience. We experimented with the idea of shifting preconceived emotional responses towards the robots. With this in mind, the final presentation consisted of exploring the robots' verbal and non-verbal communication when interacting with the audience, inciting a range of emotions and challenging their initial perceptions. At the end, we applied a questionnaire to collect responses about the audience's experiences.

Could highly-connected networks (such as the Internet) become conscious as some have speculated? In what ways might it makes sense to talk about an emerging Internet consciousness? What form would it take, and how would we know when it is manifest? Are there any ethical implications that arise from the possibility that we are collectively contributing to the creation of an artificially conscious networked entity? These were some the questions that were tackled at the Are Networks (Becoming) Conscious? workshop. Our workshop was attended by a group of postgraduate students from psychology, neuroscience, new media art, philosophy, computer science, and education. Throughout the course of the week, we grappled with thorny questions around terminological and epistemological differences that underscore any inter-/multi-/trans-disciplinary engagement. (We also had a lot of fun!) But by taking the approach that the workshop was a "temporary autonomous zone" (a concept that Roger Malina brought to our attention in his keynote talk) in which ideas were allowed to thrive, our group arrived at a model of distributed cognition and a playful, exploratory piece of software that might serve as an example of how intelligence (and possibly consciousness) might evolve within the Internet.

Remapping the Sensorium: Do You Hear What I See?

In our project we explored a number of ideas on how sonification can be used to understand highly time-dependent data, in our example patterns of intersubjective synchronicity and variability in physiological data. During a collective spectatorship of a series of audio-visual stimuli and film excerpts - carefully chosen (and manipulated) for their potential of eliciting specific intended emotional reactions - we collected a range of (neuro-) physiological measures including: heart rate, skin conductance, breathing rate, electroencephalography (EEG), eye movement, and body movement were recorded from 12 participants simultaneously. We started exploring the data using visualisation techniques and machine learning algorithms, and developed a number of novel ways to map the data in a meaningful way into the audio spectrum to provide a sonified experience of the recorded data. We also prepared devices for recording and sonifying a subset of measures in live situations. As we went along, we learned about the promises and limits of each of the technologies as well as the interpretation of collectable data. Focused sessions on machine learning, semantic mapping, scene analysis, and sound generation led towards a holistic understanding not just of physiological measures of individuals, but also of factors pertaining to group dynamics in the naturalistic setting of the film display. Furthermore Cecilia Wee, curator specialising in sound for design contexts, Matthew Dunn, a specialist on eye tracking, and Maarten de Vos, who works intensively with mobile EEGs, joined our group during the week and helped us with interpreting the data and setting up systems for live data sonification.